Overview
Becoming flatfooted can be a real health issue for people. The advice from healthcare experts is to pay attention to foot pain, and when it happens, to seek help right away. In the last 20 years, adult-acquired flatfoot has become a more commonly recognized health issue. The cause is a dysfunction of the ankle tendon that attaches to the bones on the inside of your foot. The function of this posterior tibial tendon (PTT) is to maintain the foot arch and provide strength during push-off when you walk. When the PTT is not functioning correctly, you tend to lose your arch, or become more flatfooted. This problem occurs about three times more often in women than in men, especially after the age of 40. Initially, PTT dysfunction is associated with pain on the inside of the ankle, swelling and sometimes a limp. If left unchecked, the arch appears to collapse and the pain on the inside of the ankle worsens. Eventually, if left unchecked, patients will begin to feel pain on the outside of the ankle, too. 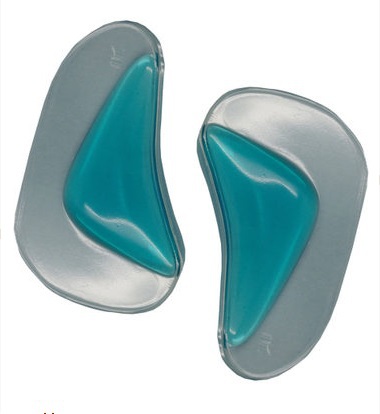 Causes
Several risk factors are associated with PTT dysfunction, including high blood pressure, obesity, diabetes, previous ankle surgery or trauma and exposure to steroids. A person who suspects that they are suffering from PTT dysfunction should seek medical attention earlier rather than later. It is much easier to treat early and avoid a collapsed arch than it is to repair one. When the pain first happens and there is no significant flatfoot deformity, initial treatments include rest, oral anti-inflammatory medications and, depending on the severity, a special boot or brace.

Symptoms
Initially, flatfoot deformity may not present with any symptoms. However, overtime as the tendon continues to function in an abnormal position, people with fallen arches will begin to have throbbing or sharp pain along the inside of the arch. Once the tendon and soft tissue around it elongates, there is no strengthening exercises or mechanism to shorten the tendon back to a normal position. Flatfoot can also occur in one or both feet. If the arch starts to slowly collapse in one foot and not the other, posterior tibial dysfunction (PTTD) is the most likely cause. People with flatfoot may only have pain with certain activities such as running or exercise in the early phase of PTTD. Pain may start from the arch and continue towards the inside part of the foot and ankle where the tendon courses from the leg. Redness, swelling and increased warmth may also occur. Later signs of PTTD include pain on the outside of the foot from the arch collapsing and impinging other joints. Arthritic symptoms such as painful, swollen joints in the foot and ankle may occur later as well due to the increased stress on the joints from working in an abnormal position for a long period of time.

Diagnosis
It is of great importance to have a full evaluation, by a foot and ankle specialist with expertise in addressing complex flatfoot deformities. No two flat feet are alike; therefore, "Universal" treatment plans do not exist for the Adult Flatfoot. It is important to have a custom treatment plan that is tailored to your specific foot. That starts by first understanding all the intricacies of your foot, through an extensive evaluation. X-rays of the foot and ankle are standard, and MRI may be used to better assess the quality of the PT Tendon.

Non surgical Treatment
Conservative (nonoperative) care is advised at first. A simple modification to your shoe may be all that???s needed. Sometimes purchasing shoes with a good arch support is sufficient. For other patients, an off-the-shelf (prefabricated) shoe insert works well. The orthotic is designed specifically to position your foot in good alignment. Like the shoe insert, the orthotic fits inside the shoe. These work well for mild deformity or symptoms. Over-the-counter pain relievers or antiinflammatory drugs such as ibuprofen may be helpful. If symptoms are very severe, a removable boot or cast may be used to rest, support, and stabilize the foot and ankle while still allowing function. Patients with longer duration of symptoms or greater deformity may need a customized brace. The brace provides support and limits ankle motion. After several months, the brace is replaced with a foot orthotic. A physical therapy program of exercise to stretch and strengthen the foot and leg muscles is important. The therapist will also show you how to improve motor control and proprioception (joint sense of position). These added features help prevent and reduce injuries.

Surgical Treatment
Surgery should only be done if the pain does not get better after a few months of conservative treatment. The type of surgery depends on the stage of the PTTD disease. It it also dictated by where tendonitis is located and how much the tendon is damaged. Surgical reconstruction can be extremely complex. Some of the common surgeries include. Tenosynovectomy, removing the inflamed tendon sheath around the PTT. Tendon Transfer, to augment the function of the diseased posterior tibial tendon with a neighbouring tendon. Calcaneo-osteotomy, sometimes the heel bone needs to be corrected to get a better heel bone alignment. Fusion of the Joints, if osteoarthritis of the foot has set in, fusion of the joints may be necessary.

Foot Pain In The Heel

Login to quote this blog

You cannot quote because this article is private.